The Arabian Peninsula and Persian Gulf contain treasures that showcase human genius as well as natural gems. From the gigantism of Dubai to windswept dunes, the United Arab Emirates, Qatar and Oman offer a range of activities in the city and in the heart of nature that will surprise travellers.

All about cruises The Persian Gulf

Although Dubai's gigantism attracts visitors, the United Arab Emirates, Oman and Qatar are still little-known. However, their skyscrapers and luxury boutiques contrast with a spirited focus on traditions and culture that is worth a detour. Here, we look at the places you must go when travelling to the Emirates. 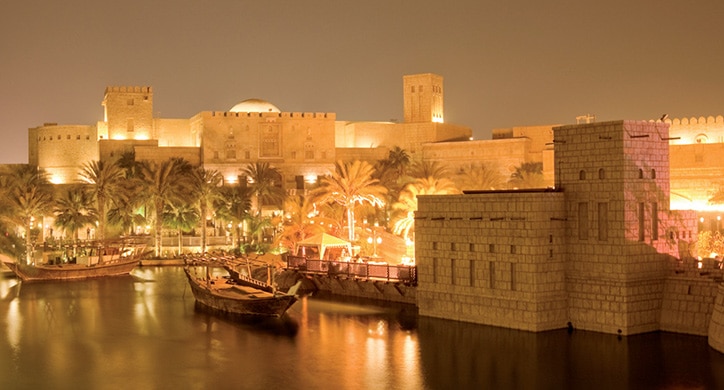 If you want to learn more about the United Arab Emirates, Qatar and Oman, then there's nothing like a handy little guide to help. 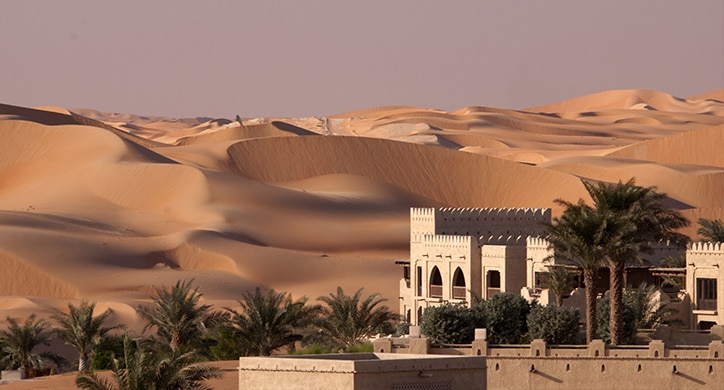 Although Dubai's gigantism attracts visitors, the United Arab Emirates, Oman and Qatar are still little-known. However, their skyscrapers and luxury boutiques contrast with a spirited focus on traditions and culture that is worth a detour. Here, we look at the places you must go when travelling to the Emirates. 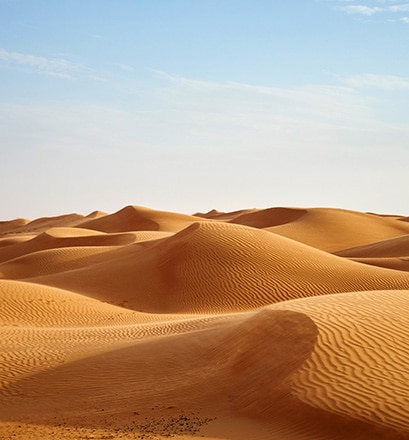 Discover the treasures of the desert - Oman

b>Nizwa stands at the edge of the desert, in the middle of an oasis. Its old crenelated fort built in the 17th century sits magnificently opposite the Sultan Qaboos Mosque. The light walls contrast with the surrounding palm groves and overlook a souk where pottery jostles with spices and lamps sit alongside fragrant fruit and vegetable stalls. Travelling east, the Wadi Bani Khalid Oasis provides a dose of coolness with its turquoise lakes and contrasting ochre rocks. Further south, Wahiba Sands stands out for its endless orange dunes. 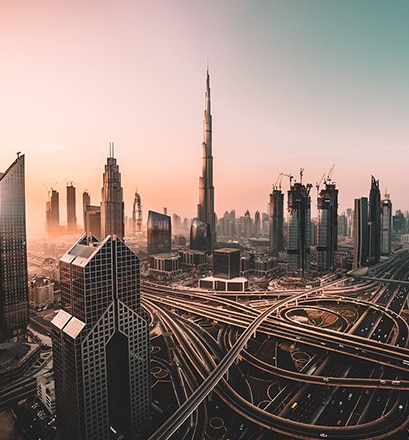 When people think of Dubai, they often picture Burj Khalifa (the world's tallest skyscraper at 828 metres), or the palm islands (artificial islands in a palm shape). Yet, Dubai also has a historical quarter, Al Bastakiya, which was built in the 19th century. The Al Fahidi Mosque, quiet streets and artisan stores give this city famous for its gigantism an authentic sense of charm. The host city for the 2020 World Expo, Dubai is also having a new and futuristic neighbourhood built: District 2020. 80% of the infrastructure will then be used to bring this "smart city" with 100,000 inhabitants to life. 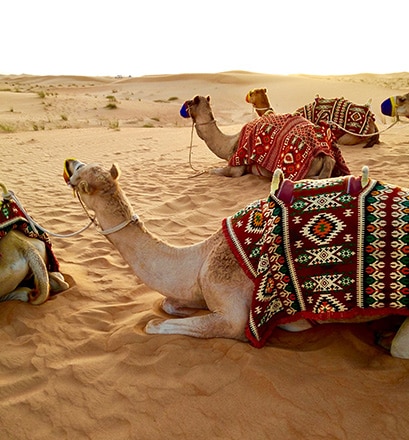 A few kilometres from Dubai, the Al Marmoom Reserve reminds travellers that although nature has been tamed in the cities, it is still running wild in the rest of the country. Covering 10% of the UAE's surface, this reserve is home to 26 reptile species and over 360 bird species, including 300 to 500 greater flamingos. The stop also provides the chance to visit a Bedouin village in the middle of a desert oasis with traditional tents and areas for cooking, farm animals and camels, and to enjoy traditional entertainment. 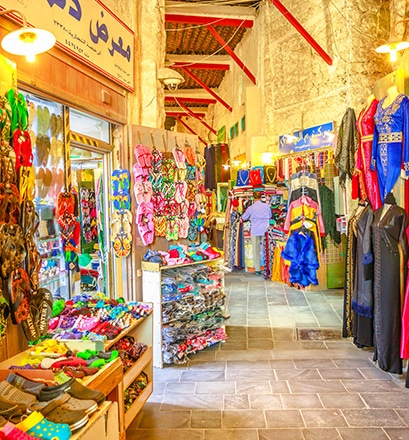 Souq Waqif is one of the liveliest areas in Doha. The stalls stay open late and are packed with specialities like spices, nuts and fresh dates, rare fragrances, jewellery, clothes and various souvenirs. Aromas snake their way out of restaurants, making visitors feel hungry. Tourists, onlookers and sellers come together in these streets, where the atmosphere livens up when rousing traditional music is played by street artists. However, Doha is also about the calm ambiance of the Museum of Islamic Art with its priceless pieces dating from the 7th to the 19th centuries. 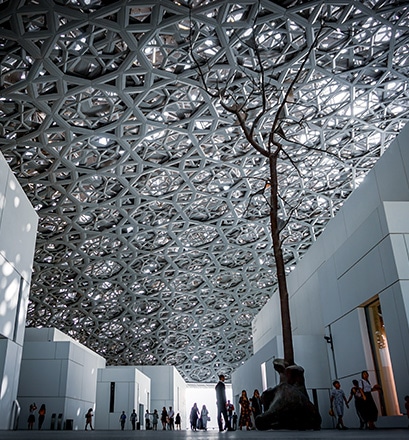 Immerse yourself in the culture of Abu Dhabi

It's impossible to mention Abu Dhabi without talking about its huge mosque. With its 82 domes, its 4 minarets standing at over 100 metres tall and its pristine white marble floor, this is one of the most spectacular in the world. It can host 40,000 visitors. Although 200 Abu Dhabi mosques are closed to non-Muslims, Sheikh Zayed Mosque is open. This gives visitors the chance to marvel at its impressive architecture, and at the world's biggest chandelier and carpet!
Another visit, another feel altogether. Since 2017, the Louvre Abu Dhabi has been the jewel in the United Arab Emirates' cultural crown. Located in the Saadiyat Island area, which has various prestigious museums, the Louvre Abu Dhabi showcases collections including some borrowed from French institutions. These highlight exchanges and influences between cultures. 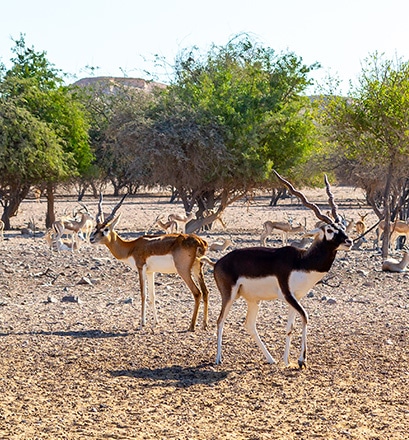 Considered something of an ecological gem, Sir Bani Yas Island is home to many animals including giraffes, cheetahs, gazelles, ostriches, hyenas and the world's biggest oryx colony. Originally a desert, it was taken on by the Emir of Abu Dhabi, who planted two million trees in a bid to protect endangered species on the Arabian Peninsula and in the United Arab Emirates. Safaris, mountain biking, kayaking and snorkelling: the island offers various activities that enable visitors to explore all its delights. 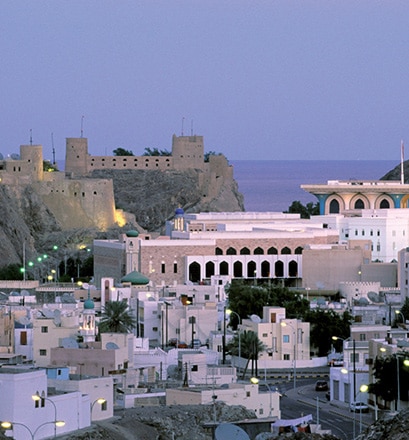 Sultan Qaboos Grand Mosque, the royal palace, Middle-Age walls, Al Alam Palace and Al Jalali and Al Mirani Forts... Muscat's recent and older landmarks make it an easy place to visit. The capital of Oman (the smallest and hottest in the world) has a peaceful feel with sea, mountains and desert: very different from Dubai or Abu Dhabi which can be disorientating.

If you want to learn more about the United Arab Emirates, Qatar and Oman, then there's nothing like a handy little guide to help.

Dos. All travellers visiting Oman, Qatar or the United Arab Emirates must be properly dressed in public. Arms and legs should be covered. However, "dressing up" in the dishdasha and keffiyeh worn by the locals isn't recommended.
Don'ts. Religion is a thorny topic here. Criticising Islam, the Emir or the authorities can lead to arrest.
The left hand is seen as unclean, so eating with it makes a poor impression.

Although Tahitian pearls are famous the world over, those of the Persian Gulf are less well-known. Yet, pearl fishing reached its peak here at the start of the 20th century. Some Bedouin tribes left their oasis in summer: the best time for gathering pearls. In the winter, they returned to tend to their palm groves. Pearl activity almost disappeared in the 40s, but then a Japanese entrepreneur opened a pearl farm in 2005 near Ras Al Khaimah. 40,000 pearls are produced here annually.

Most of the Persian Gulf's dishes are inspired by foreign specialities like Indian biryani (spicy rice with chicken, lamb or fish) and Middle-Eastern shawarma. However, ghouzi is a typical local dish - one usually reserved for evening parties. A lamb or young camel is spit-roasted on a barbecue, having been stuffed with rice, almonds and spices. Travellers do occasionally have the chance to try this dish.

Legend has it that Sinbad, the famous sailor who completed seven voyages in Arabian Nights, came from Oman. He was apparently born in the city of Sohar, north of Muscat. In Persian times, Omanis were famed for being excellent sailors. The young Sinbad came from a family of fishermen and would have learnt to control the traditional Omani dhow before casting off at sea.

Qatar lacks drinking water: something it has to manage daily. The solution chosen by the super-rich oil state is to remove the salt from seawater. Four giant hangars have been built 20 kilometres from the capital, Doha, to store almost two million litres of drinkable water. Other similar projects aim to double storage capacity by 2026. However, industry and agriculture continue to draw on groundwater. It is estimated that 100 million cubic metres are pumped each year underground.

Books. In City of Stars, the Emirati author Sala Galadari immerses the reader in 12th-century Najmia. In this fictitious Middle-Eastern town, we follow Ameera Hussain: a young woman from a privileged background. Her life is torn apart when she learns a family secret that plunges her into the war raging in the neighbouring town.

27%. This is the GDP share representing activities linked to oil and hydrocarbons in the United Arab Emirates. Aware that fossil fuel production could slow in the coming years, the Emiratis are increasingly focusing on services (business, tourism and finance) which have risen to make up 40% of the GDP.