An Interview with Mick Fogg

MICK FOGG, PONANT's Australian Expedition Manager, tells us about one of his favourite regions on the planet, The Kimberley.

After having led more than 300 expeditions through the Sub-Antarctic, South East Asia and Oceania regions, why does The Kimberley still amaze you?

It’s like nowhere else on earth, a wild land of remote, spectacular scenery spread over vast distances, it’s the Antarctica of the tropics. The sheer size and age of the landscape is humbling and it is a privilege to experience such a pristine environment that has so many facets. It is home to the oldest continuous culture on earth, the world’s largest living reptile, the only two ‘horizontal falls’ on the planet, the world’s largest inshore reef and the largest population of migrating humpback whales on the planet. The Kimberley is one of the world’s last great Wilderness areas, and one of Australia’s greatest natural assets. It is a destination that everyone should experience at least once in their lifetime.

Why is it different travelling by sea compared to doing The Kimberley by land?

The Kimberley coastline extends over 12,000 kilometres and contains more than 2,500 islands. The coastal environment is very different to the inland region, the spectacular archipelagos, pristine mangrove environments and deep gorges can only be accessed from the sea. There are only a few places along the coast that can be accessed from the land, and these are only accessible to the truly adventurous over difficult 4WD tracks that require a lot of preparation. Onboard a luxury small ship like Le Laperouse you can experience all the coast has to offer in extreme comfort with a highly attentive crew to look after you. 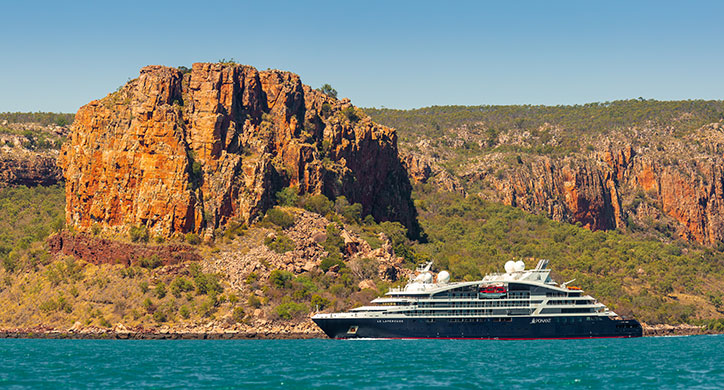 What do you continue to watch in awe, even after having experienced it over 100 times?

Montgomery Reef seemingly rising from the ocean is always a sight to behold no matter how many times I've been there!

Can you explain how the reef rises from the ocean?

Imagine 400 square kilometres of reef system invisible at high tide, covered by more than five metres of water. Then, as the tide recedes, the earth appears to bend as the water struggles to escape off the top of the reef fast enough. As Montgomery Reef breaks through the surface, water starts to cascade off the reef, forming one of the world’s longest waterfalls. There really is no adequate way to describe it and photos and video don’t do it justice. You have to see Montgomery Reef for yourself. It is an experience that will stay with you forever.

We’ve heard the tidal changes in The Kimberley are something that need to be seen to fully appreciate the sheer volume of water and power of the tides. Is this true?

Absolutely! Talbot Bay and the ‘Horizontal Falls’ provide a great opportunity to witness the power of the tides. The Kimberley has, arguably, the 2nd largest tidal change in the world, creating a truly unique phenomenon. It’s amazing to think that there are only two ‘Horizontal Falls’ on the planet and both are in our own backyard! David Attenborough has described these Falls as one of the greatest wonders of the natural world. PONANT will take guests in Zodiacs to coincide with the peak flow at the Horizontal Falls taking you right to the mouth of the falls to feel the power of up to 1 million litres of water passing through the falls every second! 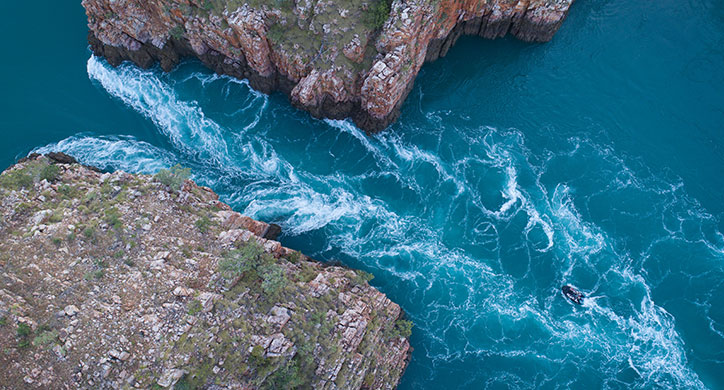 The Kimberley is home to an incredible number of Indigenous rock art sites, and this is one of the primary reason for it being put forward for world heritage listing. Is there any style of Indigenous art that is close to your heart?

The Wandjina Rock Art Gallery of Ngumbre at Raft Point is a special place. There is a sense of tranquillity that spreads over you as you sit and contemplate the activities that have gone on in this significant location of the Worrorra people. I take great pleasure in watching PONANT guests interact with the traditional custodians of the land and learn about their ancient culture and stories in stone. The Wandjina images came to prominence during the 2000 Sydney Olympics when a Wandjina image was chosen to represent Indigenous Australia. The image of a 40-foot-high Namarali rising from the ground was a very special moment. During the 2016 Vivid festival in Sydney, there was a spectacular projection of Wandjina figures onto the Sydney Opera House and that is certainly an image I won’t forget for a very long time.

Is it true that in The Kimberley you will find the oldest depictions of the human form on the planet?

Whilst no exact dates on the age of the Gwion Gwion style of rock art unique to the Kimberley has been validated, it is generally thought that they are at least 15,000 years old and may be as much as 40,000 years old. These intricate and complex depictions of the human form may be more than 5 times older than Egyptian Hieroglyphs. They were once known as ‘Bradshaws’ but their correct name is Gwion Gwion or Gyorn Gyorn. It is yet another fascinating aspect of our Kimberley experience. 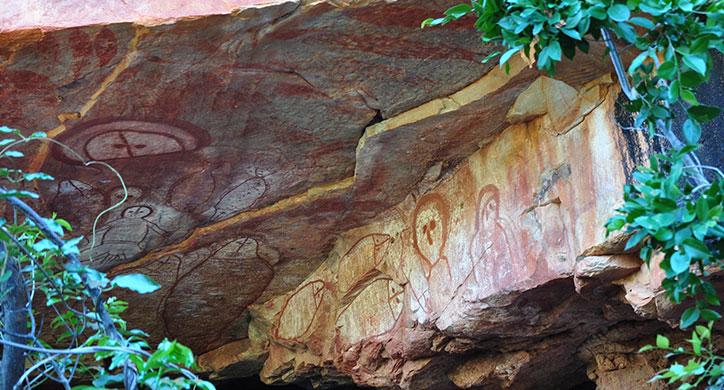 The Kimberley is known for its breathtaking Gorges. What’s your favourite?

The 19-kilometre Gorge of King George with its spectacular 90 metre high sandstone cliffs. For the more adventurous guests we offer a hike to the top of the King George Falls where they will be rewarded by an amazing view and a refreshing swim, but for me it’s about the journey up the Gorge – it is absolutely spectacular. The colours of the Warton Sandstone change throughout the day creating endless photographic opportunities– an area ideal for exploration by Zodiac. 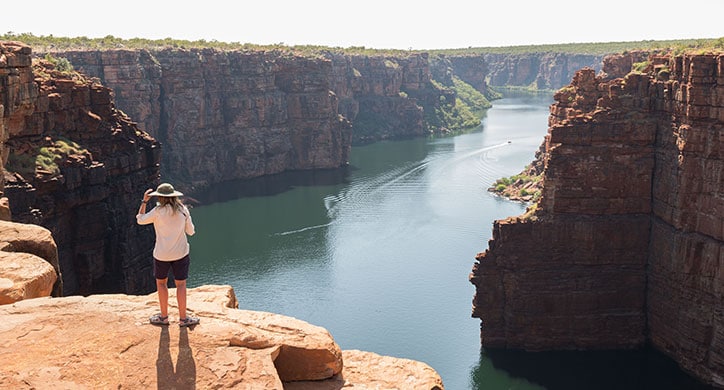 What’s an unknown fact about The Kimberley that people will discover? 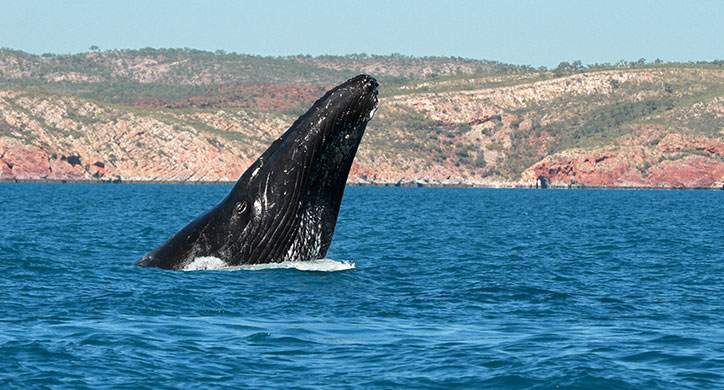 Who do you have travelling with guests, Mick?

Each voyage is accompanied by 12 Expedition Guides who are experts in their fields – renowned anthropologists, marine biologists, historians, botanists, geologists, naturalists and ornithologists all giving guests a greater understanding of the area. They really are the best in the business and your journey will be so enriched by their knowledge, enthusiasm and experience. 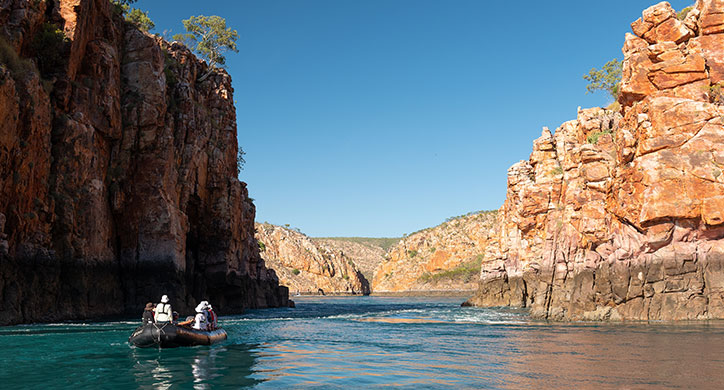 Want to join PONANT in The Kimberley?

Experience the untamed landscapes and rich indigenous history of one of the World's last true wildernesses.