The beautiful landscapes and easy living here bewitch travellers... To the east of Madagascar, Mauritius and Reunion are some of the best-known islands in the Indian Ocean. Cruises to Mauritius or Reunion are to be experienced on land as well as at sea, with dives in the fish-rich waters, stunning beaches and walks through the surprising natural surroundings.

All about cruises Mauritius & Reunion Island

Idyllic islands in the Indian Ocean, Mauritius and Reunion are ideal for nature lovers who can spend time by the water or on the lush reefs. Here are a few unmissable activities to do when you're on these two islands.

The Essentials - Mauritius and Reunion Island

Whether you spend your time by the sea or decide to venture into the lush inland greenery, a trip to Mauritius or Reunion will always amaze and provide a change of scenery. Here is some useful information to help you prepare for your trip.

The secrets of vanilla

Idyllic islands in the Indian Ocean, Mauritius and Reunion are ideal for nature lovers who can spend time by the water or on the lush reefs. Here are a few unmissable activities to do when you're on these two islands.

Fly over Reunion in a helicopter

There's nothing like taking to the skies for an intimate helicopter ride to realise just how sumptuous Reunion's panoramas are. During a 45-minute flight, you can see the island's most impressive landscapes: the Salazie, Mafate and Cilaos cirques formed inside the Piton des Neiges, behind the island's creation. Other marvels: the Trou de Fer canyon, the Piton de la Fournaise, the Plaine des Cafres plateau, Dimitile mountain and the beaches and lagoon of Saint-Paul.

The independent Chamarel rum distillery has unique skills, mastering all aspects of production from sugar-cane growing to distilling and barrel ageing. It makes for a nice stop-off where you can also have something to eat. Nearby are the Chamarel Earths: a contrasting landscape in seven colours from ochre to purple. This geological curiosity may have been created by volcanic ash containing different shades of mineral oxides and revealed by centuries of erosion. En route, the 100-metre Chamarel Waterfall only adds to the getaway's charm.

The Piton de la Fournaise is always approached with a mixture of solemnity and excitement. With its 2,600-metre peak, this is one of the world's most active volcanos. As you climb, there are various viewpoints looking out on incredible panoramas with lush and lunar landscapes. From the Nez de Boeuf, the view over the volcanic ravines and Piton de la Fournaise massif gives a good feel for this lava giant's importance. The Pas de Bellecombe crater (2,310 metres high) offers a commanding view of the volcano's active crater. Absolutely amazing. Those who are interested will enjoy a visit to the Cité du Volcan where you can experience what an eruption is like for yourself. 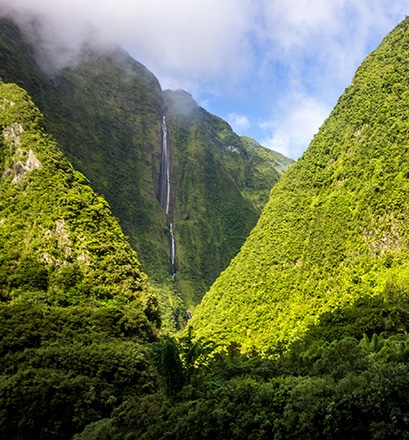 Marvel at the power of nature, Cirque de Salazie - Reunion

The Cirque de Salazie provides a real sound and light show. Here, nature stimulates the senses. The majestic landscapes sometimes hide in the mist. Water flows everywhere, creating music that is gentle - or wilder. An infinite palette of greens paints the landscape. From the road to the cirque, in the middle of Reunion, there is adventure to be had. The "Pisse en l’air" waterfall deposits right on the tarmac. Then there is a network of impressive falls in a lovely setting made up of valleys and plunging inclines. Among them is the famous Voile de la Mariée (Bridal Veil Falls) and Cascade Blanche: one of the world's highest at 640 metres tall.

Located in the west of Reunion, Trou d'Eau beach in the Lagon de la Saline is one of the island's superb beaches and ideal for various water sports. One of the best ways to explore this coastline protected by coral reef is to climb aboard a glass-bottomed kayak for a guided tour. The experience will give you the opportunity to learn more about how this coral barrier formed and the species that live here: all 3,500+ of them! 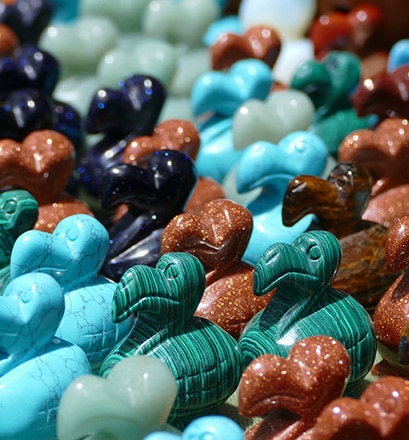 The bustling capital of Mauritius, Port Louis is best experienced like a local rather than a tourist. To gauge the city's pulse, head to the central market. The colourful stalls are packed with spices, exotic fruit and vegetables, herbal teas for curing illness and crafts that make perfect tourist souvenirs. Indian, Chinese, Creole... The sellers reflect Mauritius's cultural diversity caused by the island being located on the route to India. The Citadel (Fort Adelaide), built from the 13th century by the French, has magnificent views over the city's bay.

The Essentials - Mauritius and Reunion Island

Whether you spend your time by the sea or decide to venture into the lush inland greenery, a trip to Mauritius or Reunion will always amaze and provide a change of scenery. Here is some useful information to help you prepare for your trip.

The Sir Seewoosagur Ramgoolam Botanical Garden, also known as Pamplemousses, on Mauritius was the world's first tropical botanic garden, coming after the citrus and vegetable garden founded in 1735. The man behind it was Pierre Poivre: a famous botanist who planted trees from all over the world here. Having been added to over the years, the plant collection is still one of the world's most comprehensive today.

Mauritian and Reunion cuisines reflect the Indian and Chinese cultural influences of past centuries. Pork dumplings, rice-based dishes and samosas all evoke this heritage. However, the two islands also have their own Creole recipes. Rougail, a dish with a tomato, onion and garlic sauce, is one you must try. In Reunion, it is made with sausage, while in Mauritius, it is fish-based. Chilli sweets or chilli fritters are also well-loved snacks. These slightly spicy concoctions are made from yellow or split peas, dried chilli and herbs.

The iconic native bird of Mauritius, the dodo died out over 300 years ago. This was the first animal to suffer the devastating effects of human influence. Fearless and unable to fly, dodos didn't have any predators until the Dutch arrived. The birds were then chased by the sailors and their eggs eaten by rats and pigs brought over on the boats.
Studies carried out in 2017 by palaeontologists at the University of Cape Town on fledgling bones revealed a little more about the dodo. They could grow to a metre in height and weigh between 9 and 14 kg. "Their feathers, which were grey-brown from September to March, became downy and black between April and July to prepare them for the new breeding season," indicates Géo magazine.

Books. In 2017, J.M.G Le Clézio published Alma: a novel evoking the island he holds dear. His Breton ancestors set up home on Mauritius in the 18th century and the author considers himself to be a French-speaking Mauritian writer. Alma retraces what happened to members of the Felsen family, which divided into two branches: one noble and one shameful. Jérémie from the noble side is to set out in search of the dodo, the island's symbolic bird, which is destined to disappear due to human activity. Will he come across Dominique, a disabled outcast born on the "wrong side" of the family? The book raises lots of questions about family heritage, the destruction of nature, slavery...

Music. Dating from the time of slavery, sega is the traditional Afro-Mauritian music found across the Indian Ocean including on Reunion. The lyrics inspired by everyday life are accompanied by typical instruments like the ravanne (a kind of drum), the triangle and the maravanne (pieces of reed or sugar cane lined up and filled with gravel). Jean Alphonse Ravaton, known as "Ti Frère" (Little Brother) (1900-1992), is considered the "king of Mauritian sega".

Film. Brought together in front of François Truffaut's camera in Mississippi Mermaid (1970), Catherine Deneuve (Marion) and Jean-Paul Belmondo (Louis Mahé) play a destructive game. She is a dangerous seducer. He is in love with her, and completely transfixed. She will take everything he has, and he will be ready to give it all up for her... The plot unfolds with a stunning Reunion backdrop, before ending in the south of France.

The Piton de la Fournaise on Reunion is considered to be one of the world's most active volcanoes. Since 2010, an eruption has been registered every 9 months... This also makes it one of the most closely monitored volcanoes.