The Scattered Islands are much more than just five isles dotted around Madagascar. These wild and unspoilt Indian Ocean gems are sanctuaries for seabirds and green sea turtles; home to stunning coral and have fabulous shores bordered by transparent waters. They are some of those off-the-beaten-track stops where we are the only ones allowed to disembark.

All about cruises The Scattered Islands

Europa, Bassas da India, Juan de Nova, the Glorieuses, Tromelin… People tend not to have heard of these beautifully unspoilt French isles. The Scattered Islands are, as the name suggests, scattered around Madagascar in the Indian Ocean. Here, we look at 10 key facts to help you learn more about these dots of land. 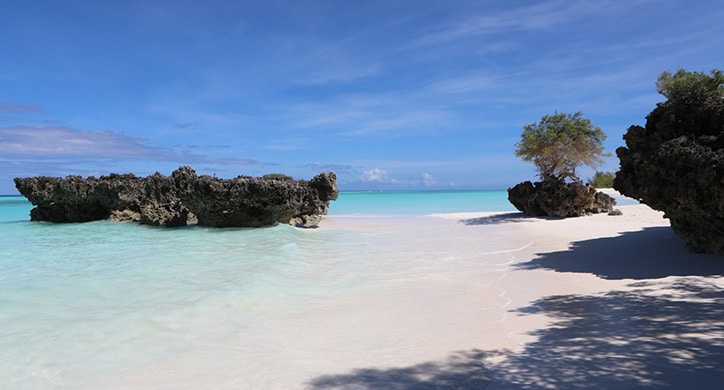 Europa, Bassas da India, Juan de Nova, the Glorieuses, Tromelin… People tend not to have heard of these beautifully unspoilt French isles. The Scattered Islands are, as the name suggests, scattered around Madagascar in the Indian Ocean. Here, we look at 10 key facts to help you learn more about these dots of land. 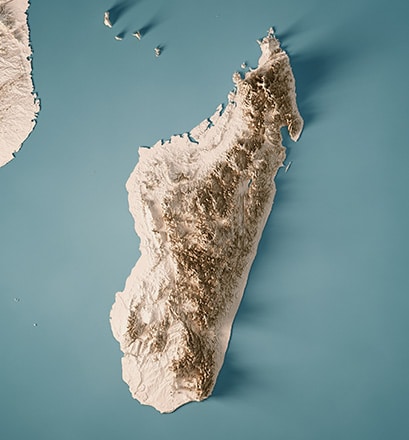 In 1896, the Scattered Islands belonged to Madagascar, which was French at the time. But while Madagascar became independent in 1960, the islands remained part of France. However, in the 70s, Madagascar started claiming they were, in fact, Madagascan territory. The discovery of significant gas reserves off Mozambique, not far from the Scattered Islands, has only made each national take a firmer stance. 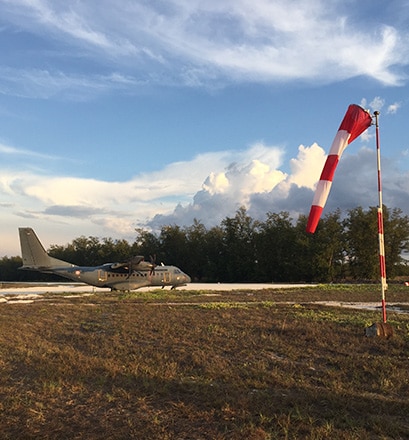 With Madagascar claiming the Scattered Islands to be its territory, France established a permanent military presence on them: police and a Foreign Legion detachment. Apart from several scientists who spend a few weeks annually on the islands taking samples, nobody lives here. 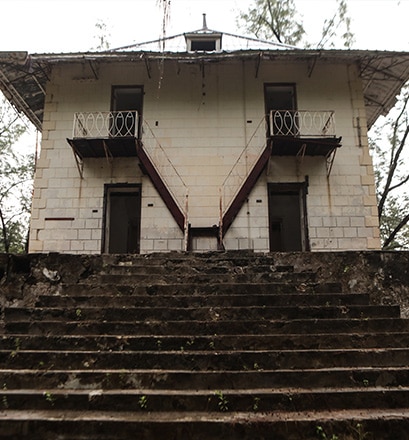 Conditions on the Scattered Islands have never allowed humans to settle here in the long-term, particularly due to the lack of drinking water. On Juan de Nova, a house in the forest and ruins of buildings on the beach are the only remains of some sort of human presence: in the past, people did try to trade in guano, sisal and copra. Even the French military currently in situ move on every 45 days. 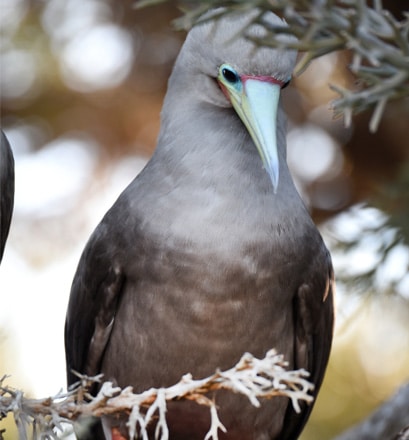 Many seabirds have chosen the Scattered Islands as a location for breeding and nesting. Red-footed boobies, frigatebirds, red fodies and red-tailed tropicbirds can all be found here. Scientists say that until recently the Scattered Islands were home to 40% of the seabirds in the western Indian Ocean. But in the last two decades, the population has declined. "While on Juan de Nova (the main breeding site) there were 1.9 million pairs in 2003, just 446,000 were counted ten years on" notes Sciences et Avenir magazine. Hotter waters decimating their "larder", invasive and predatory species like cats and rats arriving... The reasons haven't yet been clearly established. 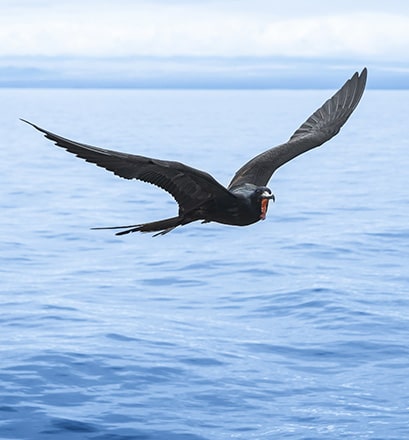 The amazing flight of the frigatebird

Studying birds has also led to some fascinating discoveries about frigatebirds. Researchers wondered how they could survive for several days at sea without returning to land either to sleep or eat. The results showed that 90% of what frigatebirds eat is a diet of flying birds that they come across while in the air. At night, they fly "on the current, 1,500 m up, to be able to sleep with their wings out, motionless, with their heart rate slowed right down". 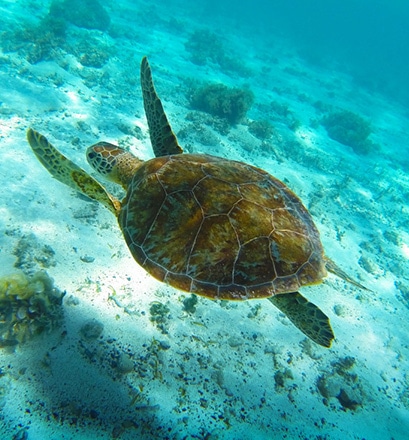 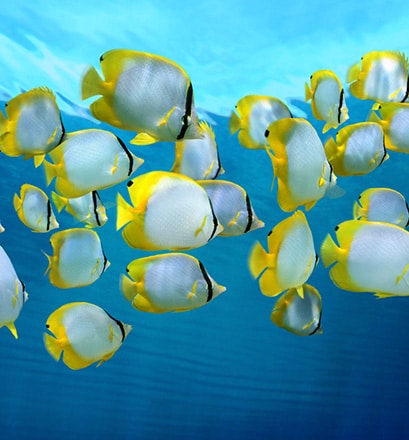 Although diving with a tank is prohibited off the Scattered Islands, you can go snorkelling. The transparent waters make it easy to see the seabed: all the more so because it has been spared any human or ship activity. The coral and fish here are simply spectacular. 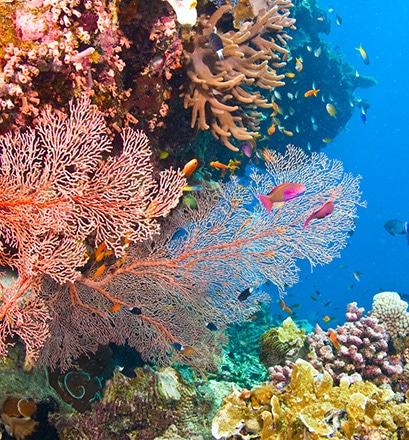 Although coral is suffering damage worldwide, in the Scattered Islands, it is unaffected. This good health is thanks to No-Take Areas (NTAs) being established in 1975. In stopping these animals being taken, the authorities have allowed them to provide larvae to regenerate other damaged reefs. 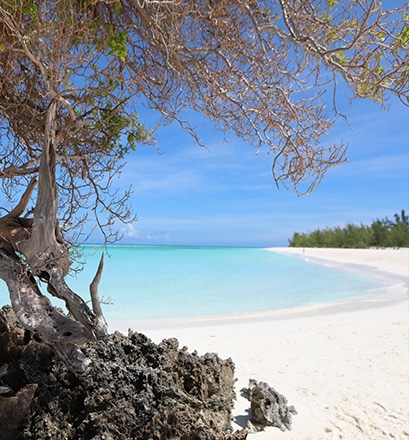 Slicks of fine sand floating on clear waters... You might think all the Scattered Islands are similar. However, the landscapes vary. Juan de Nova offers the perfect picture postcard panorama, while Grande Glorieuse and Europa are wilder with karst rock and sea turtles on the first, and mangroves, forests, beaches brimming with plant life and plenty of birds on the second. 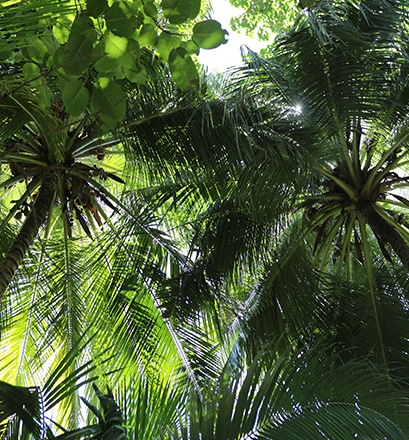 The Scattered Islands, especially Juan de Nova, are "playgrounds" for scientists looking for the "zero point" as they can study the interactions between these bacteria unaffected by human activity, meaning they have no traces of pollution, antibiotics or bacteria produced by humans.

What will be your next trip to