Since the 15th century, Portugal has wielded influence on the Atlantic Ocean. This heritage is most notable in Lisbon and Porto. Religious buildings, squares and historic buildings reflect this feel, together creating a strong and attractive sense of identity.

All about cruises Portugal

Fortified cities of the Atlantic and the Iberian Peninsula

From the shores of the Mediterranean to the Atlantic coast

Volcanic islands and historic cities of the North Atlantic

As cities looking out on the Atlantic Ocean with a special culture and a rich history, Lisbon and Porto are astonishing places to walk through. Here are some of the things you must do if you have a few days in Portugal. 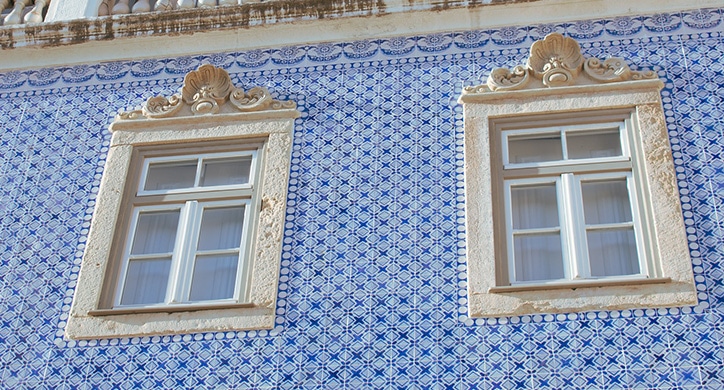 Ready to spend a few days in Portugal? Here is some key information to make your stay easier. 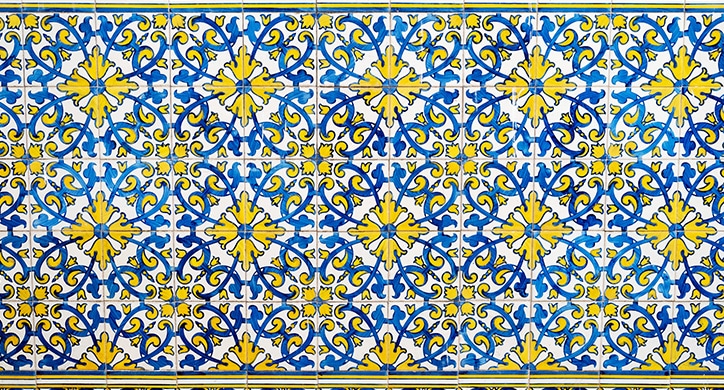 Head to Guimarães, the cradle of Portugal

As cities looking out on the Atlantic Ocean with a special culture and a rich history, Lisbon and Porto are astonishing places to walk through. Here are some of the things you must do if you have a few days in Portugal. 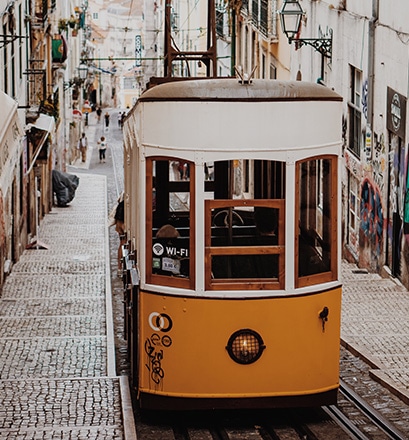 Visit Lisbon must-sees in a day

When spending a day in Lisbon, it's always nice to ride on the famous yellow trams. These city icons take you through this steep capital with breathtaking views of the roads and building frontages covered with azulejos: typical earthenware tiles. To experience the unique atmosphere of this city on the Atlantic coast, take a walk in the Baixa area: one of Lisbon's liveliest with its Rossio Square. Lisbon's history is intimately linked with the ocean, as proved by the Belém area, also known as the Great Discoveries district, whose Belém Tower represents this. 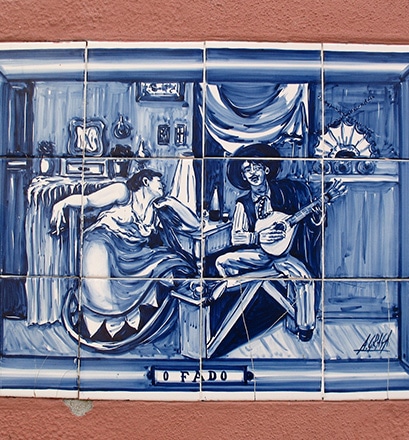 Fado is Portugal's key musical genre. Several restaurants, also known as fado houses, organise dinners accompanied by viola de fado and guitarra (a rounded guitar) and singing from famous artists. Often inspired by the melancholic notes of saudade, the lyrics of the fado evoke the baseness of life: jealousy, blighted love and the sometimes-difficult everyday. This music originated in Lisbon's working-class areas. 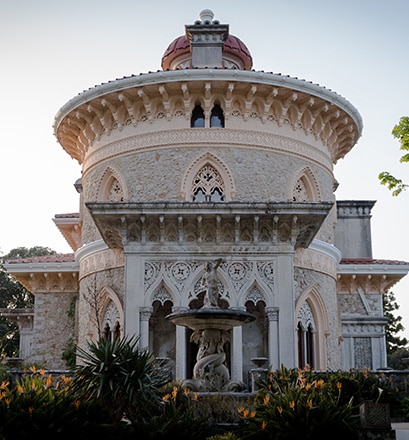 Visit the National Palace of Sintra

Around 30 kilometres from Lisbon, the village of Sintra is worth a visit because it is unusual. Perched on pine-filled hillsides containing various palaces, it has been a UNESCO World Heritage Site since 1995. Montserrate Palace surrounded by splendid gardens is one of the most beautiful, with its fine stucco and richly decorated ceilings reminiscent of Arab/Andalusian architecture. Meanwhile, the most iconic is the National Palace or Royal Palace with its two towers. Don't be fooled by its modern look: it was the seat of royal power from the 8th century and the Reconquista. It has undergone various transformations over the centuries, which is why it boasts both Manueline and Renaissance styles. 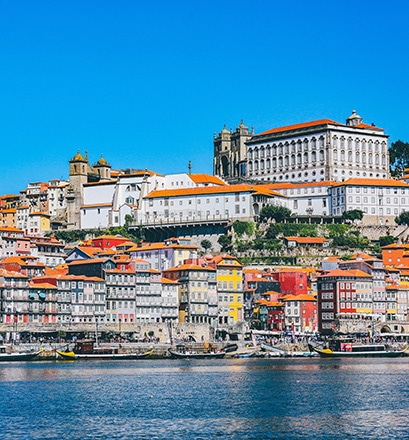 In Porto, the tram is also an important method of transport. The museum devoted to it is worth a visit, with its collection of carriages dating from 1871 to 1950. Travelling by tram, you can see the old town and the city's liveliest spots: Batalha Square and Rua Santa Catarina. It would be impossible not to go into one of its many churches and cathedrals including Porto Cathedral. Built from the 17th century and renovated numerous times, this has a range of different architectural styles: Baroque, Roman and Gothic. It's is a real jewel that dominates the city skyline. 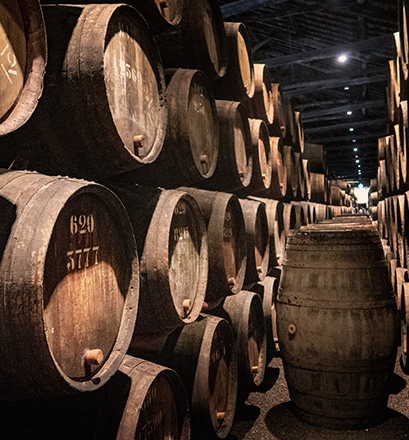 DFrom high up in Porto's old town, the view over the opposite bank of the Douro is amazing: the names of the biggest Porto's wine cellars can be seen. Further away, following the river and heading into the valley with the same name, the vineyards are a reminder that wine is locally produced here, often by families who have been working this fertile land for centuries. One example is the Taylor's cellar, which was founded in 1692. Visits to the house and cellar end with a wine tasting: an opportunity to enjoy the different flavours in Port wine depending on its age.

Ready to spend a few days in Portugal? Here is some key information to make your stay easier.

Dos. Why not adapt to the Portuguese pace of life? For example, lunch is generally at about 2pm.
Don'ts. When visiting religious sites (mainly churches and cathedrals), dress appropriately. Believers present may be upset by anyone wearing too little clothing.

Belém Tower was built in 1519 and is the symbol of Lisbon. At that time, it was in the middle of the Tagus to protect Lisbon from attacks by enemy ships. Its strategic position meant the mouth of the river and Jerónimos Monastery could both be monitored. In 1755, after the earthquake that destroyed part of the Portuguese capital, the bed of the Tagus shifted and the tower ended up on the riverbank.

According to a much-used Portuguese expression, there are as many ways to cook cod as there are days in the year. The most popular recipes include cod and potato croquettes, cod gratin made by piling up layers of fish, potato, onion and cream, and Bacalhau à Brás. This typical dish contains a mixture of shredded cod browned in garlic and onion and mixed with omelette and chips.

Legend has it that Lisbon was founded by Ulysses following an agreement with the queen of the land, the serpent-goddess Ophiussa: he became king by accepting to be her prisoner. After several years in captivity, the Greek hero worked out a way to escape his "companion", taking to the seas and tacking across the water. To follow him, the creature contorted herself into seven rings, creating the seven hills around the city.

Book. 20 years of meditations, reflections, quasi-philosophical questioning, taking a step back from society... Fernando Pessoa's masterpiece The Book of Disquiet was written under the pseudonym Bernardo Soares. The book is comprehensive, communicative, universal... The reader feels the solitude that hits us deep down and the opposing feelings that we all know well but can't put into words.

Music. UNESCO Intangible Cultural Heritage since 2011, Portuguese fado tells of impossible love, grief and the melancholy of the past accompanied by plucked string instruments. Originating in the working-class neighbourhoods of Lisbon, this style of music gradually gained popularity among the bourgeoisie and spread throughout Portuguese society. Fado was added to the UNESCO Intangible Cultural Heritage list in 2011.

Film. What if Christopher Columbus wasn't Genoese, but Portuguese instead? This is the premise for the film Christopher Columbus – The Enigma directed by Manoel de Oliveira and released in 2008. It evokes the twists and turns experienced by Manuel Luciano who since the 40s has tried to solve this mystery, travelling from one side of the Atlantic Ocean to the other and always accompanied by his wife: a quest as zany as it is poetic.

With 26.2 million bottles imported in 2017, the French are the world's biggest port drinkers. The Portuguese bought 16.9 million the same year.