The name of Amazonia has an almost mythical ring to it. This extraordinary natural reserve and its mighty river are best explored on water. From encounters with the Amerindian communities, to a voyage through the mangrove to lush natural surroundings filled with wildlife…an Amazonian cruise is an enlightening and rewarding experience.

All about cruises The Amazon

From the tropical jungle and the multicoloured birds, to the houses on stilts by the ever-present river…below is a list of what you will see in Amazonia. Mention this iconic region, which covers half of Brazil, and your mind conjures up a multitude of images. Watching the wildlife, sailing down the Amazon and coming face-to-face with the Native Americans are just some of the highlights. 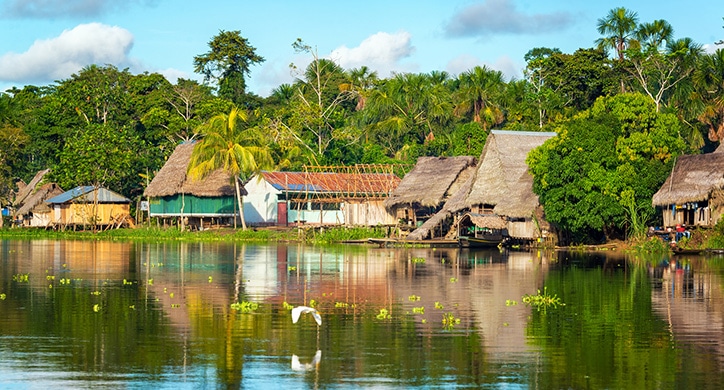 Meeting the native populations, adventures on the Amazon and nature-watching are all highlights of an Amazonian cruise. Here are a few tips and some practical info to help you prepare for your expedition to the tropics. 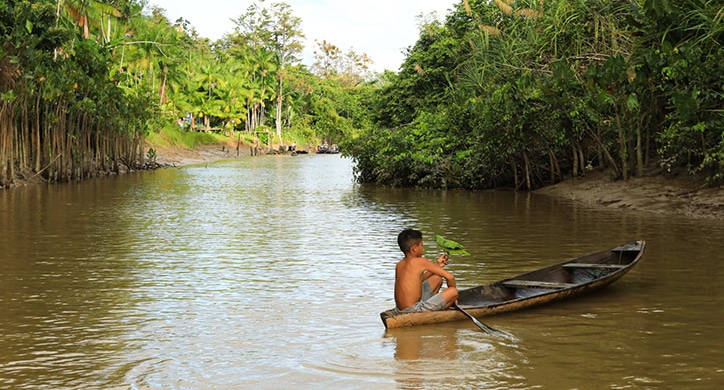 The People of the Amazon

Ponant Discovery: the story of a scouting voyage to Guyana

From the tropical jungle and the multicoloured birds, to the houses on stilts by the ever-present river…below is a list of what you will see in Amazonia. Mention this iconic region, which covers half of Brazil, and your mind conjures up a multitude of images. Watching the wildlife, sailing down the Amazon and coming face-to-face with the Native Americans are just some of the highlights. 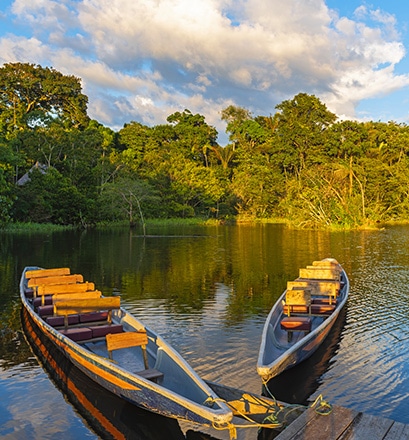 Sailing down the Amazon

The Amazon is the river of all records, topping the statistics in terms of flow rate, basin, and its hydrographic network of over a thousand tributaries. In fact, it alone drains almost half of Latin America. A cruise in Amazonia is thus a chance for adventure on its legendary waters. Discover the tropical forest from the river, with enough distance to admire its splendour and scale. 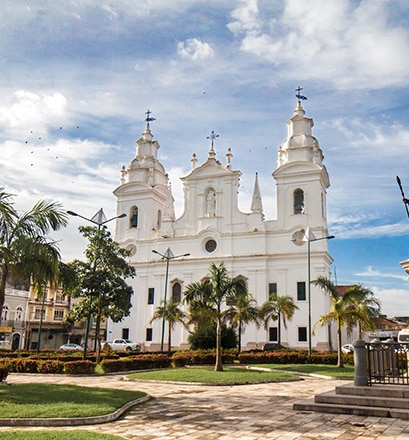 Founded in 1616, Belém is now the second largest urban centre in Amazonia after Manaus. Heritage from the colonial era includes the baroque Santa Maria de Belém cathedral. The Teatro de Paz, built in 1878, is one of the most opulent theatres and one of the most important monuments in the country. The city itself is like a continuation of Amazonia. Palm trees line the estuary and fruit trees border most avenues, earning Belém the nickname of “mango tree city.” Finally, the vast Ver-o-Peso market, inaugurated in 1901, teems with buyers who come for the bountiful wares from across the country. Fish, exotic fruit and vegetables, and medicinal herbs deck the stalls with their enticing colours and fragrances. 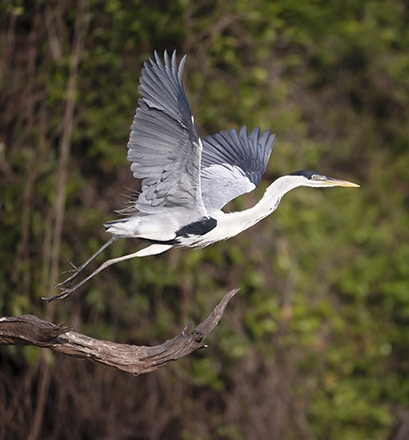 The Aquiqui River is one of the Amazon's many tributaries. Embark on a Zodiac® boat and explore every last creek as you look for birds such as the cocoi herons, roadside hawks, anhingas and toucans who nest in this lush environment. You may also spot monkeys and iguanas in this great game of hide and seek, for which the vegetation provides the ideal backdrop. 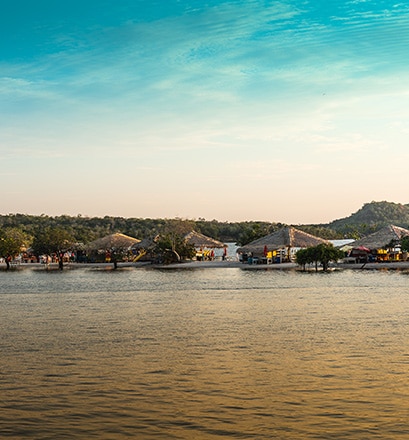 Bask in the sunshine on Alter do Chao beach

This spot is popularly known as the Brazilian Carribbean. And Alter do Chao certainly offers some very different landscapes from what we expect in Amazonia. Located on the banks of the Tapajos, a tributary to the Amazon, this small town of 2,000 inhabitants is bathed by a lagoon watered by underground springs. They form a natural lake that recedes down the river's banks during the dry season. The sandy banks that emerge then seem to form an island. The fine sandy beaches, clear waters, and little fishermen's huts with woven palm leaf roofs form the ideal haven in which to relax and get away from it all. 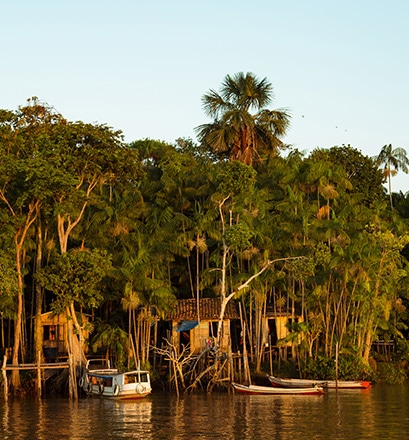 Be amazed by the Strait of Breves

The Amazon's waters are the best way to explore the region and to travel the "green corridor" of the Strait of Breves, one of the high points of a cruise in Amazonia. Here, the tropical forest merges into the muddy waters. It is teeming with life, harbouring a wealth of animal life and an array of birds. And in the midst of it all, there are the people. Deep in the characteristic villages along the canal on the shores of the Amazon, small houses stand on stilts against the lush green backdrop. Laundry dries outside on lines stretched above the timber decks, to which gently swaying dugout canoes are tied. Here and there, children frolic in the water.

Meeting the native populations, adventures on the Amazon and nature-watching are all highlights of an Amazonian cruise. Here are a few tips and some practical info to help you prepare for your expedition to the tropics.

*40% of Amazonia is in Brazil so we have selected Portuguese, which is spoken there.

A typical Amazonian dish, Tacacà is found on most menus in Belém's eateries. Before you start to enjoy the soup, there is a special serving ritual to be observed. First a ladle of tucupi, wild manioc root broth, is poured in to a calabash then covered in tapioca, then more tucupi is poured over. Next, jambu leaves (which tingle in the mouth ), prawns , a pinch of chili and garlic are added.

Other parts of the world have the yeti, but Amazonia has the Mapinguari. According to legend, after discovering the secret to immortality, a powerful shaman was turned into a giant bear-like creature with red fur, enormous claws and a mouthful of sharp teeth on its belly. It apparently has a taste for human flesh.

Land grabbing, access to healthcare and misogyny have all been issues since the election of President Jair Bolsonaro in Brazil, with native people seeing their rights diminished. Faced with decisions that have jeopardised their daily lives, many indigenous women and political leaders meet regularly to make their voices heard. Every year, thousands of representatives of the indigenous tribes hold the "Free Land Camp" on the plaza in Brasilia where the government, congress and supreme court are located, to assert their rights. In April 2019, the police presence was particularly dissuasive and misinformation on the movement profuse.

Books. An expert on Amazonia, which he has been exploring for the last 30 years, Serge Guiraud has published Amazonie, l’ordre du monde, a wonderful collection of legends told by some of the most isolated tribes in the region. Illustrated with 300 photographs, these age-old stories testify to the Amerindians attachment to their environment and their belief that visible and invisible worlds exist side by side, in total harmony.
State of Wonder, Ann Patchett. Doctor Marina Singh, a scientist and researcher for a pharmaceutical company in Minnesota, is sent to Brazil to track down her former mentor, Doctor Annick Swenson. Swenson has apparently vanished in the Amazonian jungle while working on a highly important new drug (a pill that would extend fertility for a number of years), while a colleague and friend of Marina's, who previously visited the area, died under mysterious circumstances.

Music While there is a real melting pot of musical styles in Brazil, the Carimbó is particularly emblematic of Latino rhythms. Its exhilarating beats have their origins in the music brought over by the Portuguese and the Africans to the Nordeste region of Brazil. In 2014, it was added to Brazil's immaterial cultural heritage list.

Film. The Dead and the Others by Brazilian film-makers Joao Salaviza and Renée Nader Messora (2019) is a successful mix of genres. It is both a documentary and a mystical drama, telling the story of Ihjac, a young Amerindian. When his father dies, he is called by his totemic animal, the parrot, to become a shaman. He first refuses but finally accepts his role as "forest warden", a function recognised by the UN in 2007. The film received the "Un certain regard" prize from the jury at Cannes in 2018.

According to a study by the Brazilian Institute of Geography and Statistics in 2010, 274 indigenous languages are spoken in the country. Linguists, for whom certain languages are similar, quote a number ranging from 160 to 180.