Together with their faraway neighbours the Azores, Madeira and Cape Verde, the Canaries are part of Macaronesia: a vast region in the Atlantic characterised by these dots of volcanic land. The Canary Islands have made the most of their fertile soil and developed a tourist offering where relaxation is king. Tenerife, Lanzarote, Gran Canaria… Discover a Mediterranean ambiance in the middle of the ocean!

All about cruises Canary Islands

From Madeira to the Canary Islands

Price is per person, double occupancy, is based on availability, and subject to change at any time. The category of cabin to which this price applies may no longer be available.

The Canary Islands off the Moroccan coast have long built up their reputation as a destination ideal for relaxation and getting away from it all. Here are our top 5 things to do in the Canaries.

With their stunning beaches and arid volcanoes, the Canaries are a popular Atlantic Ocean destination. It is useful to understand what makes this Spanish territory off the coast of Africa tick: below are some examples. 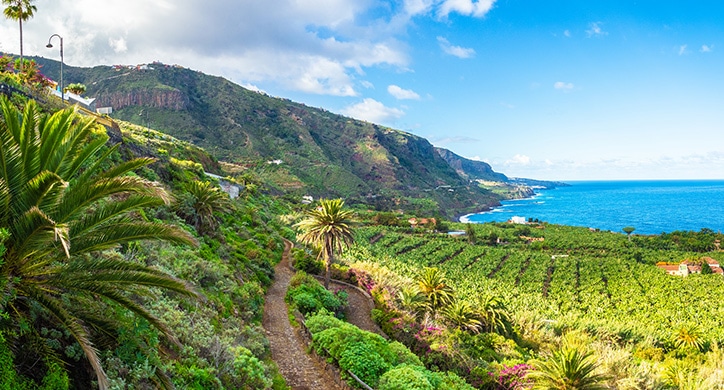 The Canary Islands off the Moroccan coast have long built up their reputation as a destination ideal for relaxation and getting away from it all. Here are our top 5 things to do in the Canaries. 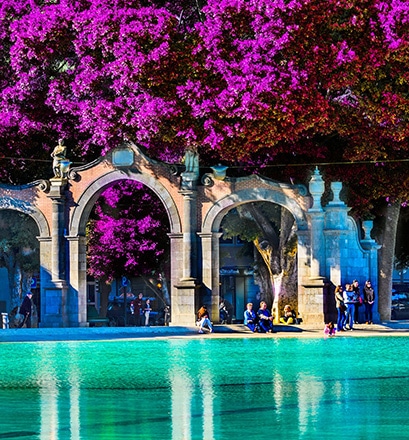 Tenerife's capital Santa Cruz is in the north of the island. Travellers looking to relax on the warm sand will soon take themselves off to Las Teresitas beach to the north of the city: one of the best-known beaches in the Canaries. Others will enjoy exploring Santa Cruz city centre and the huge Plaza de España square with its large cooling lake fountain. Nearby, don't miss Plaza de la Candelaria with its white marble obelisk dedicated to the Virgin of Candelaria (the patron saint of the Canaries), or Nuestra Señora de La Concepción church, which was built on the site of the first chapel erected by the conquistadors in 1500. There is also the modern auditorium which looks out on the sea. 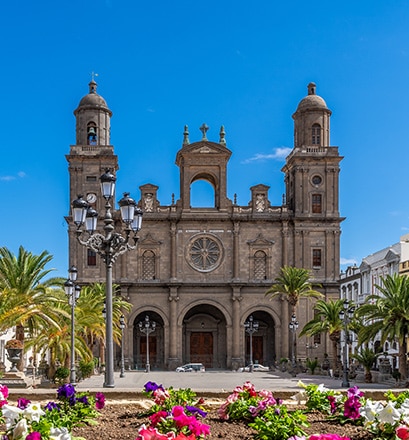 Like Santa Cruz in Tenerife, life in Las Palmas in Gran Canaria is all about relaxing on the stunning Las Canteras beach, which is edged with palm trees, and visiting places in the city. Start with the historic city centre and Vegueta district (named a UNESCO World Heritage Site in 1990) to immerse yourself in the Canaries' history. From the 15th century, Las Palmas was a beacon for Dutch and Portuguese, conquistadors and pirates. You feel like you're travelling through time as you move between streets: from Plaza Santa Ana guarded by bronze dogs to the 19th-century town hall, Santa Ana Cathedral and the Columbus Museum. You'll discover for yourself that Las Palmas is a really nice city. 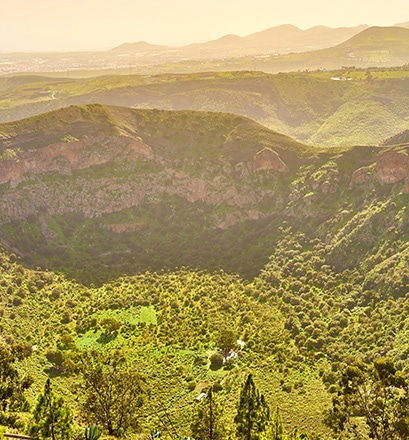 Although the Canaries are famous for their beaches, they are still volcanic islands just like Cape Verde, Madeira and the Azores. On Gran Canaria, you can visit the Bandama crater and go down into its 200 m-deep caldera. The crater is protected by the walls of a 574-metre volcano, meaning unique flora has grown up. Native species include the "Lady of Bandama". 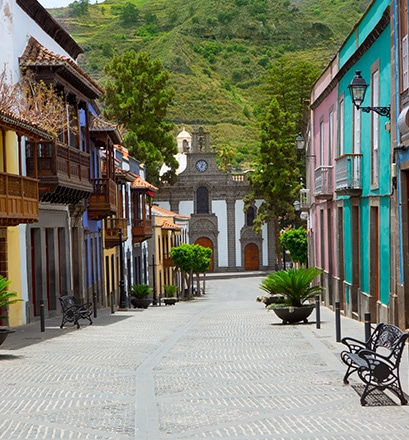 Narrow paved alleys bursting with green pot plants. Houses with whitewashed and coloured walls. Carefully constructed wooden balconies. Unlike the lively seaside atmosphere of Las Palmas, Teror is a tranquil little inland town. This tranquillity is relative as Teror became Gran Canaria's religious capital when Pope Pius XII declared the Virgin patron saint of the island in 1914. The Nuestra Señora del Pino Basilica is home to a wooden statue of the Virgin Mary. Legend has it that she appeared to shepherds in a pine tree in 1481. However, Teror is also famous for its Sunday market. It's the oldest in the Canaries, having been running for 200 years. Today, its 140 stalls sell artisan and religious items, fruit, vegetables and local produce. 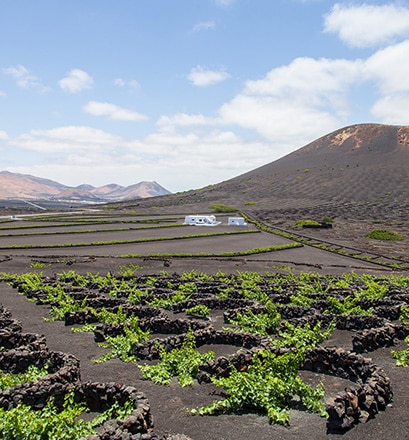 Spend a day in Arrecife, Lanzarote

Lanzarote is certainly one of the most arid islands in the Canaries, with a totally lunar landscape. Like in the Azores, the vines are surrounded by volcanic rocks. Seafront villages stand out from the rolling landscape with its red soil providing a curious contrast. Those looking to cool off enjoy Playa del Reducto on Lanzarote. The island's capital also boasts the Charca de San Ginés. This famous lagoon has a few pleasure and fishing boats bobbing on the water in front of a string of whitewashed houses. This creates the feeling of Greece...in the middle of the Atlantic.

With their stunning beaches and arid volcanoes, the Canaries are a popular Atlantic Ocean destination. It is useful to understand what makes this Spanish territory off the coast of Africa tick: below are some examples.

Dos. When in the Canaries, you forget urban stress and live life at a more relaxing pace. The welcoming locals are keen to help tourists. The least you can do is smile and be polite in return.

Don'ts. The Canarians are mostly devout Catholics. Legs and shoulders are normally covered in church.

Since 2009, Silbo Gomero (La Gomera's whistled language) has been a Masterpiece of the Oral and Intangible Heritage of Humanity. Its origins remain uncertain. Some say it may have been imported by the first people to arrive on the island: the Guanches, who most likely came from Morocco's Atlas Mountains. We know that over the centuries it has been a way to spread important news across the island and announce the arrival of enemy ships. Today, it is still used to invite neighbouring villages to patron saint fiestas, weddings, christenings, etc. This social language is easily confused with birdsong...

Gofio is the basis of many Canarian recipes. It is a kind of cereal flour (made from wheat, millet or maize) that is grilled but not sifted. It is used to make cakes, creams, flans, breads, etc. Canarians most often mix it with milk or soup. Mojo is another typical element of Canarian cuisine. This red, orange or green sauce can be spicy (or not) and is served with many dishes, fish, meat and potatoes. The recipe contains three basic ingredients: oil, garlic and vinegar. Depending on the desired flavour, spices, dried fruit, peppers, coriander, tomato, cumin and avocados are then added.

Some legends say that the Azores are the real-life remains of the mythical Atlantide, Meanwhile, the Canaries have their own "imaginary island". A popular myth in the archipelago says that this eighth island can be seen floating on the horizon from Tenerife, La Palma, El Herrio and La Gomera. Maps from the Middle Ages also include it. It was first mentioned in travel narratives written by the Irish monk Saint Brendan in 516. Legend has it that the sun never set on the black-sand beaches and fruit grew abundantly. A real Eden...

Books. Alexis Ravelo is a Spanish author who lives on Gran Canaria, the setting for two of his novels which have been translated into English and French: The Pekinese Strategy and Flowers Don't Bleed. A far cry from the idyllic holiday destination image people tend to have of the island, he describes what life is like for the little people who live off petty thieving to meet their everyday needs, confronted by white-collar crooks. When these two worlds collide, the suspense becomes heart-stopping. Ravelo is a new noir fiction author worth following.

Music. Being at the crossroads between Europe, Africa and America, the Canaries have developed a rich musical tradition. Music that was popular in Spain between the 17th and 20th centuries, which has now disappeared on the continent, is still found in the Canaries. Examples include romancescos , folía and seguidillas : dances accompanied by acoustic guitars.

Film. Did you know? Moby Dick (1956) was filmed in the Canaries. The volcanic landscapes of Lanzarote and Tenerife served as the backdrop for One Million Years B.C. (1966) with Raquel Welch. More recently, filmmaker Pedro Almodóvar also decided to set Broken Embraces, featuring Penelope Cruz, in Lanzarote.

Of the seven islands that make up the Canaries archipelago, five are part of the UNESCO Biosphere Reserve. Only Tenerife and Gran Canaria are outside it.

What will be your next trip to

Click on the items you want to select.  You can select several of them. You can click on an item again to deselect it.