Costa Rica, Belize and Guatemala are the flagships of Central American cruises, and they're full of national parks with extraordinary vegetation and wildlife, relaxing beaches, some of the most stunning diving spots in the world, and Mayan sites that are testament to the wealth of this ever mysterious civilisation. All of this within countries where serenity and well-being are part of the art of living.

Between the Caribbean and the Maya

A Tropical Odyssey in Central America

Colón - Puntarenas
LE DUMONT-D'URVILLE
Shore excursion or activity in each port of call + transfers included
7 nights on board
Dates:
10/2/2024 to the 17/2/2024
Other available dates
Starting from AU$7,290
25% Ponant Bonus
Discover

National parks, marine marvels, tropical flora and fauna, and cultural features are what make Central America different. Visit some of the iconic and diverse sights of Central America. 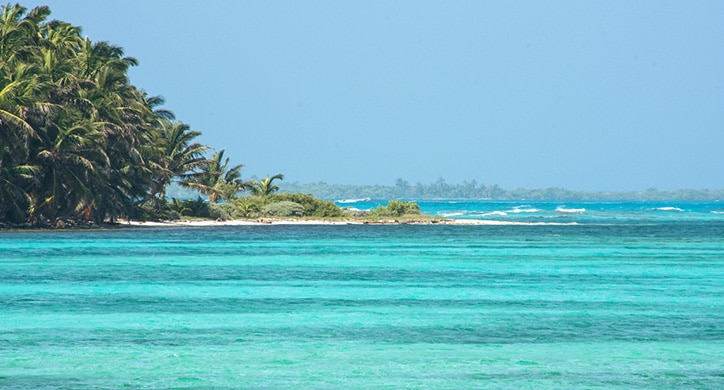 Because fun facts, cultural features, and local sights make your travel experiences even better, here are some practical and useful recommendations for going on a cruise in Central America, and particularly in Costa Rica, Belize or Guatemala. 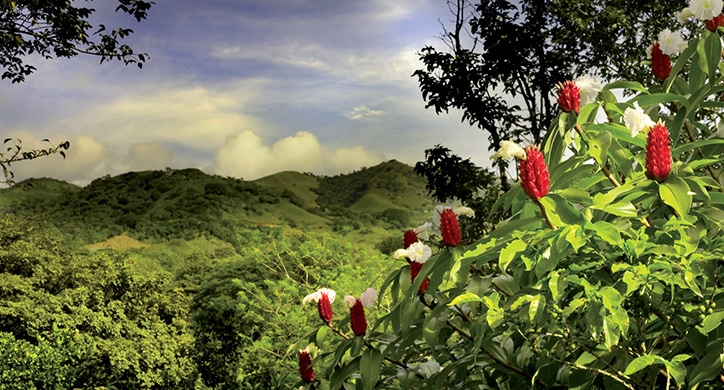 Take a stroll through Antigua

A day (or two) in Livingston

National parks, marine marvels, tropical flora and fauna, and cultural features are what make Central America different. Visit some of the iconic and diverse sights of Central America. 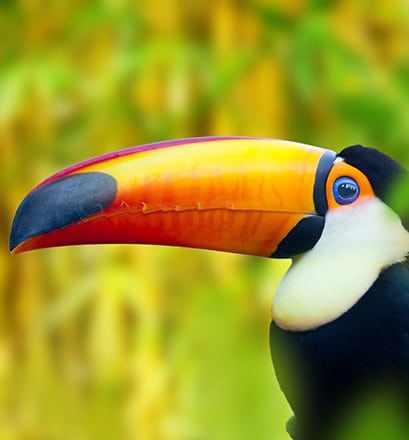 It may be the smallest protected area in Costa Rica, but Manuel Antonio National Park is certainly not lacking in diversity. Situated on the country's Pacific coast, it extends over both land and sea. There is little demarcation between primary and secondary forests, mangroves, beaches and marine environments. A visit to the park gives you the opportunity to see sloths, monkeys, coatis, iguanas, snakes, and dozens of bird species; and you'll also be able to enjoy the white sandy beaches lined with crystal waters. There's a reason why it was selected by Forbes magazine as one of the twelve most beautiful parks in the world. 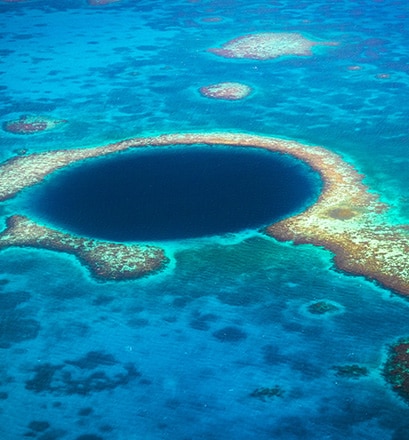 The Great Blue Hole: around 80 kilometres from Belize City

The Great Blue Hole is found in the centre of the Lighthouse atoll. The underwater sinkhole, at 300 metres in diameter and 124 metres deep, is the largest of its kind and is protected by a coral reef. Jacques-Yves Cousteau, who considered it one of the top ten places in the world for diving, contributed to its reputation. 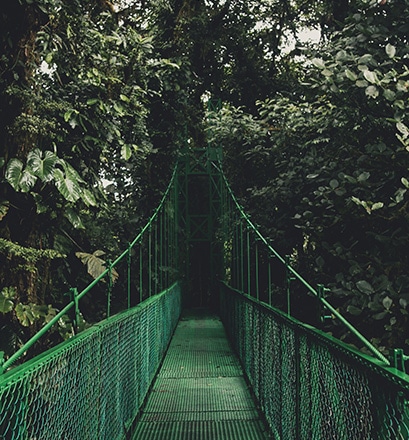 For a variety of viewpoints, head to the treetops. Several parks in the centre of Costa Rica allow you to get between 12 and 60 metres high thanks to footbridges, walkways and cable cars.
Submerge yourself in the heart of the tropical forest where the mountain mist mixes with luxurious vegetation and creates an enchanting tableau. 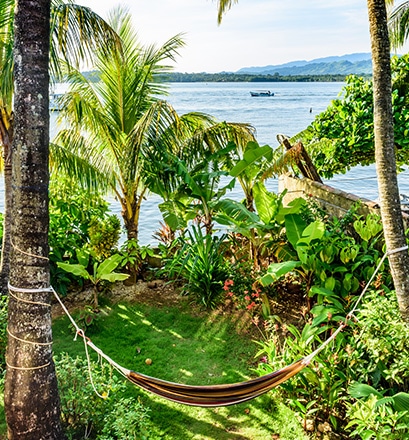 Unique to Guatemala, the town of Livingston was built by the Garifuna, descendants of slaves, and is imbued with Caribbean culture. The town, nicknamed the “pearl of the Caribbean in Guatemala”, can only be accessed by boat. This unique enclave located in the east of the country, at the mouth of the Rio Dulce, offers a breathtaking place to stay. In the town, dancers, bands playing Garifuna music - similar to reggae - and the local cuisine reflect this Caribbean-like atmosphere. Outside the town, white sand beaches and pools of water fed by waterfalls in the heart of the forest provide a unique swimming spot. 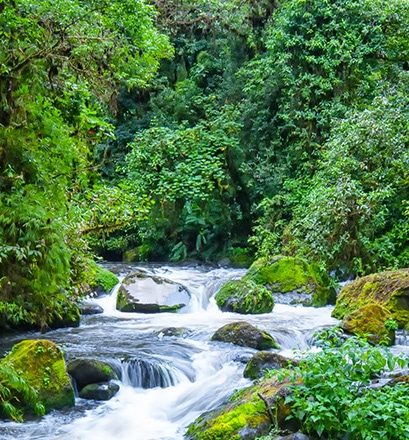 Take to your paddles and travel down one of the most beautiful rivers in Central America. The Rio Savegre is known for the luxurious vegetation along its banks. White ibis, cormorants, egrets and herons inhabit the water's edge, while crocodiles bask in the sun. Thanks to our expert guides, you can learn about the river and its environment in a fun and educational way. Professional equipment provided by the guides makes it easier to observe wildlife.

Howler and capuchin monkeys squabble with each other in the trees under the disdainful eye of the sloth. Lower down, coatis rummage around the bed of leaves, while timid crabs scurry around their crab hole. The luckiest visitors might also get to see some deer. In the sky, pairs of colourful macaws show the way to the depths of this incredible forest. The Curú wildlife refuge on the Nicoya peninsula is certainly very far away from the tourist trail. 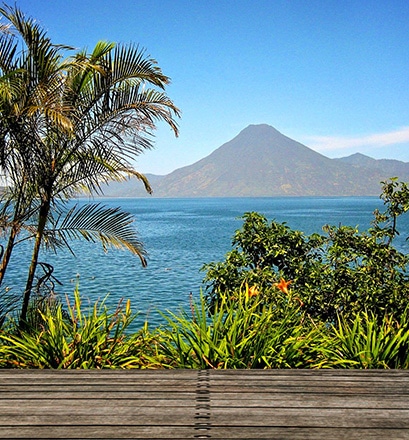 Considered “the most beautiful lake in the world” by German geographer Alexander von Humboldt, Lake Atitlán has always been a point of fascination. The Maya peoples settled here more than 2,000 years ago, and it remains a special place of worship. French aviator Antoine de Saint-Exupéry may even have found inspiration for his Little Prince character here while convalescing in Guatemala after a plane crash in 1938. Visitors will be in awe of the clear waters brooded over by the volcanoes of San Pedro, Tolimán and Atitlán, all rising to over 3,000 metres above sea level. It's certainly not hard to understand why this endorheic lake, the deepest in Central America, has been a source of inspiration for many writers.

Because fun facts, cultural features, and local sights make your travel experiences even better, here are some practical and useful recommendations for going on a cruise in Central America, and particularly in Costa Rica, Belize or Guatemala.

Dos. At the Maya markets in Guatemala, whispering is considered polite.
People may not take kindly to being photographed without permission. The Maya people consider it an invasion of their privacy.
Ask if they mind before you take a shot.
Don'ts. When travelling in Costa Rica, be aware of an integral rule: lighting a cigarette or vaping is prohibited in all enclosed areas, and also in some outdoor areas, such as on certain parts of beaches, on terraces or near schools.

During your Costa Rican cruise, you may notice that the army is nowhere to be found. And for good reason—it's the first country in the world to have eliminated the army from its Constitution, following the 1948 civil war. The military budget has been allocated to universities and hospitals. People's safety is now assured by the 13,000 national police officers.

In all countries in Central America, rice and beans form the basis of all dishes.
In Guatemala, they are served with avocado, tomatoes and meat.
Costa Rica's national dish is casado. Plantain and beef, chicken or pork are teamed with rice and beans. This is accompanied by avocado and small potatoes, cassava, pickle or cabbage salads.
In Belize, the dish of choice is meat or fish stew. It's combined with finely chopped green peppers, onions, carrots, and celery; coriander and garlic, lemon juice, and spicy sauce.

Recommended reading. A literary road movie, Nouvelles d’Amérique centrale by Cécile Chabot (Poche, 2013) is a collection of short stories about humankind, from Mexico to Panama. These seventeen snapshots portray children, men, and women having to face harsh reality and disillusionment, as well as love and hope.

Monkeys Are Made Of Chocolate by Jack Ewing (2005) immerses you in the fascinating world of the tropical rainforest of Costa Rica and the creatures that live there. Author and naturalist Jack Ewing shares his observations and experiences after spending 30 years in the south-west of the country, which is home to one of the world's richest ecosystems.

Music. The marimba is a type of xylophone made of wooden bars mounted on resonator pipes originating from Africa, but widely used in Central America. Marimba music was placed on UNESCO's List of Intangible Cultural Heritage in 2010.

Film. A Bold Peace, 2016, in English: a documentary about Costa Rica's demilitarisation in the 1950s and the desire to live in peace while the country was surrounded by nations in crisis at the time, in the midst of the cold war.

The Savegre Biosphere Reserve was added to UNESCO's world heritage list in June 2017. It contains 20% of Costa Rica's flora, 54% of its mammals, and 59% of its birds, as well as 50,000 inhabitants involved in agriculture and ecotourism. It encompasses the area of the Savegre River, regarded as one of the most beautiful in Central America.

Tata Duente (or grandfather goblin) is a character in Belizean and Central American folklore. He is usually represented as small, with no thumbs, his feet the wrong way round, and he wears a pointed hat. Like the bogeyman, he casts a frightening figure for children. If they misbehave, he might make them disappear in the forest or cut off their hands!

7%. This is the percentage of the world's biodiversity found in the tropical rainforest bordering the Caribbean coast of Central America. It's an inhospitable region, a true extension of Amazonia.